The American Pika Gets Another Shot at CESA Protection
10.21.2010
Posted in Listing, Litigation 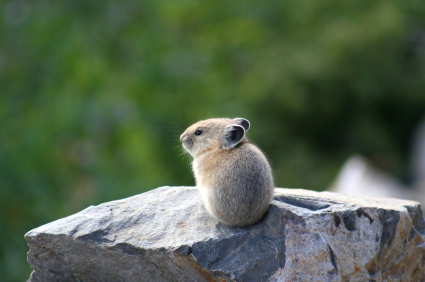 In 2008, the Center for Biological Diversity (CBD) filed a petition to list the pika as threatened under the California Endangered Species Act (CESA).  CBD argues that the pika is threatened with extinction because climate change in the form of increasing average temperatures in California's eastern Sierra Nevada mountain range has reduced the pika's alpine habitat by driving the pika, a species especially sensitive to ambient temperatures, to move to higher, cooler elevations.  As its habitat has shrunk, its population has declined.

The petition is part of CBD's and other environmental organizations' ongoing effort, previously blogged about here, to convince state and federal wildlife agencies to list species as threatened or endangered due to climate change.  Listing of this tiny relative of the rabbit that primarily inhabits mountain ranges in the American West could have been a very big deal – and not just for industries and proposed actions located with the pika’s range. If a species is listed as threatened or endangered specifically due to climate change, then any private industry or federal government action that may affect climate change – think any industry that emits greenhouse gasses (GHGs) and any private, state, or federal project that may increase GHG emissions – could be required to comply with the stringent regulatory requirements (and attendant litigation risks) of the Endangered Species Act because GHG emissions anywhere could impact threatened or endangered species everywhere.

As blogged about here, the Fish & Wildlife Service recently determined that listing of the pika under the federal Endangered Species Act is not warranted, despite predicted increases in the average ambient temperatures in the pika's range.  In determining that listing of the Mohave ground squirrel may be warranted, it did not agree with the petitioners there that climate change can be identified as a significant factor because it does not believe that current climate change models are "capable of making meaningful predictions of climate change for specific, local areas such as the range of the Mohave ground squirrel."

However, the Fish & Wildlife Service has recently listed the African penguin as endangered, due, in part, to climate change.  It is also in the process of determining whether listing is warranted for Whitebark pine, and the National Marine Fisheries Service is considering the impacts of climate change and other factors on 82 species of stony coral.