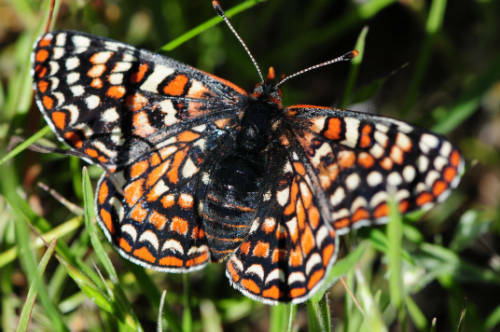 The Service initiated a status review of the butterfly species in January 2021 as a result of growing concern regarding stressors to the species’ habitat, such as increased recreation and worsening drought due to climate change, which in turn causes feral horses and elk to graze certain plants important to the butterfly species’ survival. The Federal Register notice indicates that these conditions threaten the species’ nectar supply and physical livelihood.

According to the Federal Register notice, due to increased drought and recreation in the species’ habitat, the Sacramento Mountains checkerspot butterfly has declined in abundance, density, and number of populations. The notice also states that only two isolated populations of the Sacramento Mountains checkerspot butterfly exist, both in diminished quantities relative to the species’ history. Based primarily on these findings, the Service proposes to list the butterfly as endangered. The Service does not propose to designate any critical habitat for the species at this time, stating that critical habitat for the butterfly is not determinable due to insufficient information necessary to perform the required analysis of the impacts of a critical habitat designation.

The Service is accepting comments on the proposed rule until March 28, 2022. The Federal Register notice and supporting documents are available at regulations.gov, under Docket Number FWS-R2-ES-2021-0069.