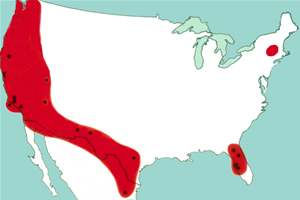 Today, the U.S. Fish and Wildlife Service and National Marine Fisheries Service (Services) published a notice of proposed rulemaking (PDF) in the Federal Register that will, if adopted, change the Services' standards for listing and delisting species as threatened or endangered under the Endangered Species Act (ESA).  See Draft Policy on Interpretation of the Phrase ‘‘Significant Portion of Its Range’’ in the Endangered Species Act’s Definitions of ‘‘Endangered Species’’ and ‘‘Threatened Species.’’ 76 Fed. Reg. 76,987 (Dec. 9, 2011).

Under the draft policy, when making listing decisions the Services would:

1.  Deem a portion of a species' range to be "significant" if its contribution to the viability of the species is so important that without that portion, the species would be in danger of extinction;

2.  Limit the "range" to the range currently used by a species during any of its life stages; and

3.  Extend a listing decision made on the basis of a threat to the species' viability throughout only a "significant portion of its range" to the entire species, throughout its entire range.

The draft policy interpretation has already drawn harsh criticism from the Center for Biological Diversity, which calls the proposal a "recipe for extinction."  By defining significance of a portion of a species' range in terms of a threat to the entire species, not just to the species found in the limited portion of its range, the Services may list fewer species and delist more than they would if "significant" was defined without reference to the entire species.  And by limiting "range" to the current range, a species that has suffered severe declines in historic range, but which is flourishing in its current range, may not qualify for listing and protection under the ESA.

In a Questions and Answers (PDF), the Services explain that while a species will not be listed solely on the basis of lost historical range, "the causes and consequences of loss of historical range on the current and future viability of the species must be considered and are an important component of determining whether a species is currently threatened or endangered."  But this has not mollified critics.

In contrast, landowners may find cause for concern because, under the draft policy, if a species is found to be endangered or threatened only within a significant portion of its range, then under the proposed interpretation the entire species would be listed, and the ESA's corresponding protections would apply throughout the species' entire range.  Thus, a species may be listed in areas where it is currently thriving, resulting in unnecessary and costly over regulation in some areas.

Although styled as a "draft policy," it is essentially a proposed rulemaking because it is the Services' "intent to publish a final policy . . . that will be accorded deference by the federal courts."  Clearly, the Services hope the new policy interpretation will eventually end claims brought in litigation over listing decisions based on past interpretations of "significant portion of its range" in the ESA's definitions of "endangered species" and "threatened species."  However, by defining "significant portion of its range" with reference to the range's importance to the species, not the geographic extent of the range, the draft policy interpretation would appear to be at odds with the plain meaning of the statutory text.

Indeed, in response to litigation over the meaning of the phrase, on March 16, 2007, the Solicitor of the Department of the Interior issued a formal opinion on the meaning of "significant portion of its range" (the so-called M-Opinion).  However, the courts have since rejected aspects of the interpretation in the M-Opinion as applied by the Fish and Wildlife Service, and the DOI withdrew it on May 4, 2011.

The comment period is open for 60 days.  Until the policy is formally adopted, the Services intend to use the draft policy as guidance in their respective listing decisions.