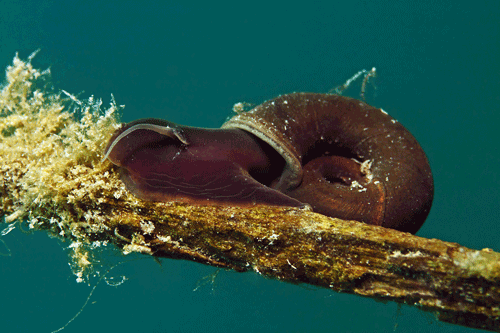 For the magnificent ramshorn (Planorbella magnifica), a fresh-water snail species native to southeastern North Carolina, efforts to secure protection under the federal Endangered Species Act have progressed at a snail’s pace. Today, twelve years after environmentalists originally petitioned the U.S. Fish and Wildlife Service (Service) to list the species, the Service proposed to list the magnificent ramshorn as endangered, and to designate two ponds spanning 739 acres as critical habitat for the species. The proposed rule was prompted by a lawsuit filed by the Center of Biological Diversity which pressed the Service to make a finding on the snail (and other species) earlier this year.

The magnificent ramshorn is an air-breathing, herbivorous snail that is extremely salt-intolerant. Its shell is relatively large and thin, which indicates that the species is adapted to living in still or slow-flowing waters. Historically, the magnificent ramshorn has inhabited beaver ponds and mill ponds. The Service has determined that loss of this habitat, in conjunction with other factors such as sea level rise, pollution, and extreme weather events, is causing the species to disappear from the wild. Two distinct captive populations of magnificent ramshorn exist today, comprising approximately 1,000 individual snails. Despite these numbers, experts are concerned a catastrophic event could lead to the near extinction of the species.

In its proposed rule, the Service lists three potential conservation strategies to help the snail: (1) maintain at least two secure captive populations until the species is stable in the wild; (2) reintroduce the species to at least two historical locations and use monitoring to ensure that these populations are successful; or (3) introduce the snails to at least two other locations with suitable habitat within the historical range of the species and monitor for success. After surveying over a hundred potential sites, the Service identified two critical habitat units (Orton Pond and Big Pond) as the proposed sites to develop the wild snail populations.

The proposed rule will be open for comments until October 17, 2022. The Federal Register notice and supporting documents are available at regulations.gov, under Docket Number FWS-R4-ES-2022-0070.