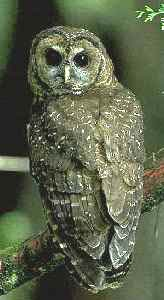 In a published opinion (pdf) affirming the denial of preliminary injunctive relief, the U.S. Court of Appeals for the Ninth Circuit held that "there is no statutory mandate to consider cumulative effects during informal consultation."  Conservation Congress v. U.S. Forest Serv., No. 12-16452 (June 13, 2012).

In order to address issues in the Shasta-Trinity National Forest, the U.S. Forest Service proposed the Mudflow Vegetation Management Project (Project).  The Project included a variety of activities, including thinning, sanitation, and regeneration.  Because the Project area included designated critical habitat for the threatened Northern Spotted Owl (Strix occidentalis caurina), the Forest Service prepared a biological assessment (BA) analyzing the impacts of the Project on the Owl and its critical habitat.  The BA concluded that the Project "may affect, but is not likely to adversely affect" the Owl or its critical habitat.  Shortly after preparing the BA, per the requirements of section 7 of the Endangered Species Act (ESA), the Forest Service initiated informal consultation with the U.S. Fish and Wildlife Service.  The Fish and Wildlife Service subsequently concurred with the "not likely to adversely affect" determination, thereby ending the consultation process.

The Ninth Circuit also made short work of the plaintiff's evidentiary argument, finding that in light of the totality of the evidence and the deferential standard of review, the defendants "reasonably concluded" that the Project was not likely to adversely affect the Owl or its critical habitat.  Accordingly, the Ninth Circuit affirmed the district court's denial of preliminary injunctive relief.