Is The God Squad Heading Toward Extinction?
By Benjamin Rubin on 02.22.2021
Posted in Fish & Wildlife Service 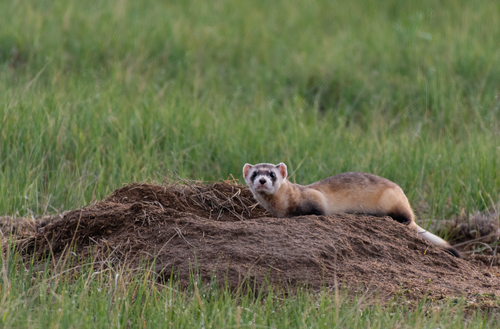 In the 1978 amendments to the Endangered Species Act (ESA), Congress created the Endangered Species Act Committee, also know as the “God Squad.” The God Squad is composed of mostly Cabinet-level officials and has the authority to exempt a federal agency action from the ESA’s prohibition on taking actions that could lead to the extinction of an endangered or threatened species. While the God Squad has been around for more than four decades, its awesome powers have rarely been invoked. Perhaps due to scientific advances, it is possible that the God Squad may itself be heading for extinction.

As recently reported by a number of news outlets and by the U.S. Fish and Wildlife Service (Service), scientists have succeeded in cloning an endangered black-footed ferret (Mustela nigripes) from the cells of a ferret that lived more than 30 years ago.

While the black-footed ferret was once found in 12 States, it was considered extinct or nearly extinct until a small population was located in South Dakota in 1964. By 1967, the black-footed ferret was listed as endangered throughout its range. In 1981, a second remnant population was discovered. However, after a disease outbreak, all surviving black-footed ferrets (totaling 18 individuals) were removed from the wild between 1985 and 1987. Since that time, the Service and scientists have taken a number of steps to try and bring the population back, including captive breeding programs and reintroduction of experimental populations. Because of the small remnant population, and the fact that reproductive efforts were only partially successful, lack of genetic diversity was seen as a significant challenge to the black-footed ferret’s long-term survival. The ability to clone prior members of the species with unique genetic traits is therefore seen as a potential game-changer.

While cloning is not necessarily new – you may recall that Dolly the sheep was the first mammal successfully cloned in 1996 – this is the first time ever that an endangered species has been successfully cloned. What this means for the future of endangered species on the edge of extinction is still an unknown, but one can certainly imagine that its broad application could be a major tool in preserving and possibly restoring animals from the present and the past.