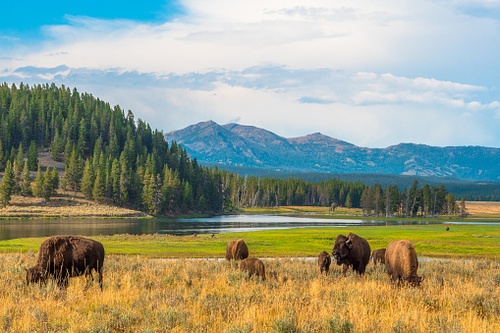 On August 6, 2019, the U.S. Fish and Wildlife Service (FWS) published a 90-day finding that listing the Yellowstone Park bison (Bison bison bison) under the Endangered Species Act is not warranted. FWS also found that listing the Mojave poppy bee (Perdita meconis) and revising the critical habitat designation for the endangered Mount Graham red squirrel (Tamiasciurus hudsonicus grahamensis) may be warranted.

According to FWS, the Yellowstone bison, a subset of Plains bison in and around Yellowstone National Park, are the oldest and largest wild population of Plains bison remaining. They comprise the last bison herd in the United States descending from a continuously wild herd.

The 90-day finding on the Yellowstone bison follows multiple petitions to protect Yellowstone bison as an endangered or threatened distinct population segment. In January 2016, FWS published a 90-day finding that listing was not warranted. In response, environmental groups Buffalo Field Campaign, Friends of Animals, and Western Watershed Project filed a lawsuit alleging that the 90-day finding violated the federal Endangered Species Act and Administrative Procedure Act. In January 2018, the District Court for the District of Columbia ordered FWS to issue a new 90-day finding, concluding that FWS had improperly applied a heightened evidentiary standard by ignoring scientific evidence in support of the petition without explaining why reliance on that evidence would be unreasonable. The Court explained that the correct standard for a 90-day finding is whether a reasonable person could choose to agree with the scientific studies in support of the petition. Buffalo Field Campaign v. Zinke, 289 F. Supp. 3d 103, 109-112 (D.D.C. 2018). The same environmental petitioners brought a second case in May 2019, challenging FWS’ delay in making a “proper” 90-day finding on the petition.

In its most recent 90-day finding on the Yellowstone bison, FWS acknowledged that the petitions identified several “threats” related to curtailment of the species’ range, such as commercial overutilization and disease. In particular, Yellowstone bison that migrate beyond the borders of Yellowstone National Park are culled, hunted, quarantined, or hazed pursuant to the Interagency Bison Management Plan (IBMP), which was adopted in 2000 by federal and state agencies and Native American tribes to prevent the transmission of brucellosis from bison to livestock. However, FWS concluded that these conditions do not negatively affect the species because the Yellowstone bison population has increased above historical levels (from an estimated 1,000 to 5,500 individuals) and is reaching the carrying capacity of Yellowstone National Park. FWS also concluded that the petitions failed to provide substantial evidence that climate change will negatively affect Yellowstone bison within the next 75 years, noting that historical range of Plains bison, from southwestern Canada to northern Mexico, evidences their ability to survive in diverse climates.