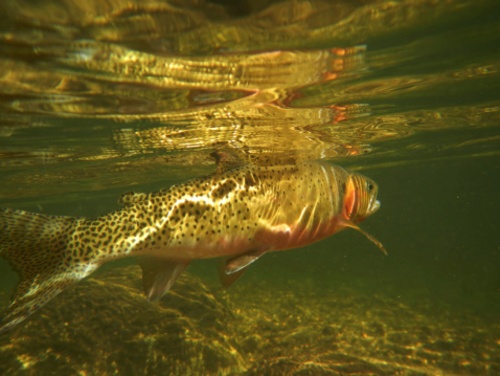 On September 26, 2019, the U.S. District Court for the District of Colorado vacated and remanded in part the U.S. Fish and Wildlife Service’s (Service) 2014 determination that listing the Rio Grande cutthroat trout (Oncorhynchus clarki virginalis) under the Endangered Species Act (ESA) was not warranted.

In 2014, the Service determined that listing the Rio Grande cutthroat trout was no longer warranted.  Plaintiff Center for Biological Diversity challenged that decision.  In contrast with the 2008 determination, the Service estimated that there were 55 populations in “best” or “good” condition, including some populations with fewer than 2,500 fish and as low as 501 fish.  The court opined that the administrative record for the Service’s decision did not explain why the Service had apparently lowered its standards for identifying healthy trout populations from its 2008 standards.  The court remanded the 2014 determination back to the Service for an explanation of the criteria used to calculate healthy trout populations, following F.C.C. v. Fox Television Stations Inc., 556 U.S. 502, 515 (2009), which held that an agency must provide a detailed justification for a new policy when it “rests upon factual findings that contradict those which underlay its prior policy.”

The Service’s 2014 determination was affirmed in all other respects.  The court held that the Service was not required to analyze each of the five statutory factors that govern whether listing of a species under the ESA is appropriate expressly and in seriatim, where the Service addressed the factors holistically as part of its broader analysis, and correlated the risk factors it was considering to the statutory factors. (Section 4 of the ESA provides that a species may be listed based on (1) present or threatened destruction or curtailment of habitat; (2) overutilization for commercial and recreational purposes; (3) disease or predation; (4) the adequacy of existing regulatory mechanisms, and (5) other natural and man-made factors affecting the species. 16 U.S.C. § 1533(a)(1)(A)–(E).)

Nossaman represented the New Mexico Department of Game and Fish as an Intervenor-Defendant in this action.