Free-Market Habitat Plan as an Alternative to Avoid Listing of Lesser Prairie Chicken Under the Endangered Species Act
By Katrina Wu on 11.28.2012
Posted in Conservation, Critical Habitat, Delisting, Listing 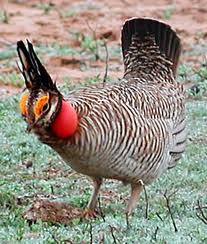 On November 5, 2012, the Environmental Defense Fund (EDF) sent a letter to the U.S. Fish and Wildlife Service (Service) encouraging the Service to consider an innovative approach to support conservation of the lesser prairie chicken (Tympanuchus pallidicinctus): through the use of habitat credit exchanges between companies and landowners.  The letter comes at a time when the Service is considering whether to propose to list the lesser prairie chicken under the Endangered Species Act (ESA).  Currently the Service has determined that listing of the species "is warranted, but precluded."

The letter to the Service explains the "recent success" of using the habitat credit exchange for conservation of the dunes sagebrush lizard (Sceloporus arenicolusin) in lieu of listing the species as threatened or endangered.  The approach used in the Texas Conservation Plan for the dunes sagebrush lizard "includes the full mitigation hierarchy of avoidance, minimization and compensatory mitigation, and designates habitat credit exchanges as the means for compensatory mitigation."  The habitat credit exchange provides landowners the opportunity to generate income by developing and selling credits that represent conservation action on their land to companies that will receive in exchange "both regulatory assurances and operational certainty."

The Senate Committee on Environment and Public Works also sent a letter to the Service on July 16, 2012 applauding the Service's determination to not list the dunes sagebrush lizard because of the voluntary agreements entered into to protect the species, and encouraging the Service to consider these types of agreements when making its determination on the lesser prairie chicken.

The EDF proposal is the most recent of several innovative conservation initiatives based on market mechanisms proposed by the EDF to conserve endangered and threatened species. Prior EDF initiatives included the use of safe harbor agreements to encourage landowners to protect and enhance the habitat of various species starting with agreements to protect the mature longleaf pine (Pinus palustris) forest habitat of the red-cockaded woodpecker (Picoides borealis) in the southeast and east United States.