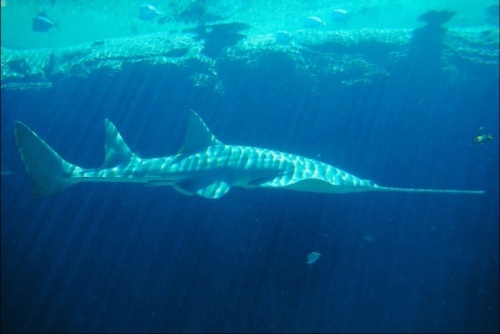 On November 1, 2019, Chad Ponce of Jacksonville, Florida pleaded guilty to killing a smalltooth sawfish (Pristis pectinata), an endangered species protected under the federal  Endangered Species Act (ESA) and Florida Endangered and Threatened Species Act . Sawfishes are a family of rays characterized by a long, narrow, flattened rostrum, or nose extension, lined with sharp teeth, arranged in a way that resembles a saw. Sawfish use that rostrum to sense and attack prey; without it, they can’t survive. They are among the largest fish, with some species reaching lengths of up to 17-18 feet.

There are five sawfish species worldwide, and all are considered endangered or critically endangered by the International Union for Conservation of Nature. Sawfish were once abundant worldwide, throughout tropical and subtropical regions in coastal marine and estuarial waters, as well as freshwater rivers and lakes. The smalltooth sawfish historically migrated along the east coast as far north as North Carolina; today, however, the smalltooth sawfish is found only in the southeastern United States, in waters off of southwestern Florida.

A witness reported to the National Oceanic and Atmospheric Administration (NOAA) that on July 18, 2018, they saw Ponce aboard his fishing vessel using a power saw to remove the rostrum from a 12-foot sawfish. Under the federal ESA’s criminal enforcement provisions, Ponce could face up to a year in prison and a fine of up to $50,000.  The case was investigated by NOAA and the Florida Wildlife Commission, and prosecuted by the United States Attorney’s Office for the Middle District of Florida.