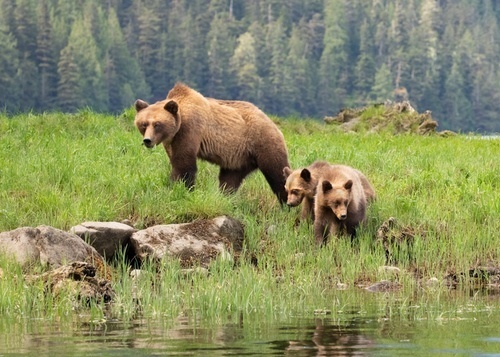 In December 2020, the United States District Court for the District of Montana issued an order on cross-motions for summary judgment concluding that it lacked jurisdiction—under both the Administrative Procedure Act (APA) and Endangered Species Act (ESA)—to hear a lawsuit involving an environmental group’s denied request to update an existing recovery plan for the grizzly bear (Ursus arctos horribilis). Ctr. for Biological Diversity v. Bernhardt, CV 19-109-M-DLC, at 26 (D. Mont. Dec. 23, 2020) (Order). After listing the grizzly bear nearly half a century ago, the U.S. Fish and Wildlife Service (Service) prepared a recovery plan in 1993 with the purpose of recovering grizzly bear populations in four areas: Yellowstone, Northern Continental Divide, Cabinet-Yaak, and Selkirk. In 2014, an environmental group sent a letter to the Service asking the agency to update the recovery plan to address areas of suitable habitats and current scientific information. The Service denied the request, and a lawsuit alleging APA and ESA violations followed.

Adhering to the principle that federal courts are courts of limited jurisdiction, the court concluded that it did not have jurisdiction to hear any of the claims. In reaching its conclusion, the court analyzed two specific issues:

First, the court found that a request to update a recovery plan is not a petition for rulemaking because a “recovery plan” does not meet the APA’s definition of a “rule.” Order at 21. The APA allows a court to review final agency action, which includes the denial of a petition to promulgate a “rule.” 5 U.S.C. § 702; Order at 16. While the court stressed that recovery plans are a vital tool for species conservation, a recovery plan is not an APA rule “designed to . . . prescribe law or policy[.]” 5 U.S.C. § 551(4); Order at 20-21. The court rejected the plaintiff’s arguments that the letter request was a petition for rulemaking and the Service’s denial was a response to agency rulemaking. Order at 13, 26. Thus, the court concluded it did not have jurisdiction over the APA claims.

Second, the court found that the ESA does not require the Service to update its recovery plan based on the best available scientific information. Order at 25. Section 4(f)(1) of the ESA imposes a nondiscretionary duty on the Service to “develop and implement” recovery plans that must include three specific plan components. 16 U.S.C. § 1533(f)(1). The court noted that the plain language of section 4(f)(1), unlike its statutory counterparts, does not impose a mandatory duty to revise or update the recovery plan with the best available scientific information. Order at 23-25. Because the ESA’s citizen suit provision allows the court to hear cases where an agency allegedly failed to perform a nondiscretionary duty, the court concluded it lacked jurisdiction to hear the ESA claims. Order at 26.

The court’s decision is consistent with prior holdings limiting the extent to which advocates may characterize recovery plans as regulatory documents rather than roadmaps for use by the Service and others involved in efforts to conserve listed species.