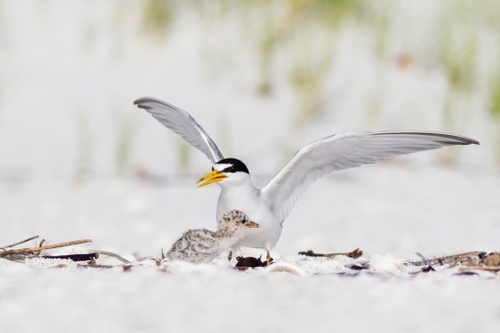 On October 24, 2019, the U.S. Fish and Wildlife Service (FWS) published a proposed rule in the Federal Register announcing the agency’s finding that the interior least tern (Sterna antillarum) is no longer warranted for listing as an endangered species under the Endangered Species Act (ESA).

The interior least tern, the smallest of the tern species in North America, was first observed in 1804 by explorers Meriwether Lewis and William Clark. The fish-mongering bird currently nests adjacent to major U.S. rivers within the Lower Mississippi Valley and the Great Plains region across 18 states.

Before it was listed as endangered under the ESA in 1985, the interior least tern experienced habitat loss and degradation from dam and reservoir construction, river and bank channelization, hydropower generation, and water diversion. Additionally, the introduction of invasive plants to the least tern’s sparsely-vegetated sandbar habitat contributed to its decline. But as the FWS noted in its news release announcing the delisting proposal, it was the abundant harvesting of the least tern’s feathers for hat-making in the 19th and 20th centuries that decimated the population to near extinction. The Federal Register notice for the proposed rule states that at the time of listing, fewer than 2,000 least terns remained.

In its Federal Register notice for the proposed rule, the FWS states that over the last 34 years, collaboration among dozens of government agencies, landowners, industrial partners, and environmental organizations across several states helped the interior least tern’s population increase considerably. The notice further provides that restoration plans such as the Platte River Recovery Implementation Program collectively led to a reduction, or even complete elimination, of the threats identified for the species at the time of listing.

In particular, the FWS credits the tern’s recovery to the decades-long partnership between the FWS and the U.S. Army Corps of Engineers (Corps) in implementing conservation measures that improved the bird’s critical habitat. Through its 2005 rangewide monitoring program, the Corps confirmed that the tern’s population had been increasing in the decades since conservation efforts began.

The FWS initially proposed removing the interior least tern from ESA listing in 2013 after concluding in a status review that the species’ population had recovered. Since then, the Corps has developed new monitoring and conservation plans to maintain the population improvements post-delisting.

The proposed rule states that FWS based its decision to delist the species on the best available scientific and commercial data, which indicates that the least tern no longer fits the definition of endangered under the ESA. The interior least tern’s current estimated population, at over 18,000, is more than ten times what it was at the time of its listing in 1985. Additionally, the review by FWS shows that previous threats to the tern’s population, including habitat loss, curtailment of range, predation, and inadequacy of regulatory mechanisms no longer exist or have been adequately reduced.